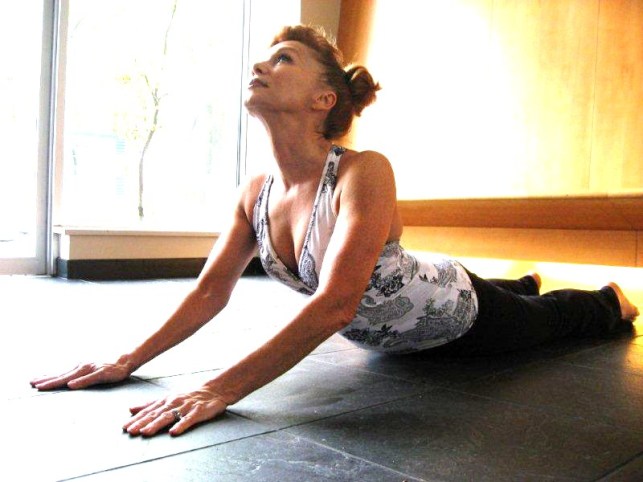 What Is All the Rage about Yoga & is It a Good Place to Get a Date??

It’s a Throwback kind of week and so I decided to update and Repost this article!

Just over 3 years ago I let my husband talk me into going to a yoga class.  I have always been an active woman & prefer a more vigorous form of exercise.  Of course with that type of thinking, injuries, muscle aches & pains have appeared as the years progress with each passing birthday! “Type A” personalities have a tough time letting go of this “old school mentality of no pain no gain.”

So what changed my mind to allow The Zen into my life?

I ran into one of my son’s closest friends who had to come right up to my face before I recognized him.  He had lost so much weight in the 5 months since I had last seen him I couldn’t believe it.

He was so lean & fit which had drastically transformed his appearance including his now chiseled face!  He was doing yoga 4 times per week and no real cardio regimen other than the odd casual bike ride.

As a woman who is always battling with that last 10 lbs of body weight, this spiked my interest!  Off I went to his studio to see what this “yoga stuff” was all about.

My first visit was to a power class which had a heated room temperature of 32 Celsius.  Many years ago I did experiment with a Bikram Hot yoga class never to return again to that 90 minute torturous environment of jungle heat!

I’ll bet my internal organs were ready to be served as an appetizer they were so baked! It would have helped if I hadn’t been hung over & dehydrated from a birthday party the night before.  Which leads me to think how do people drink tequila all day in hot climates without passing out?

I am not one of the thousands of locals who continually complain about the moist Vancouver weather, as I do prefer cooler temperatures for the most part. But…That 41 C (106 F) degree room put me off yoga for many years! No offense to the popular Bikram Studios, I just personally couldn’t handle exerting myself in that intense heat for an hour and a half.

(Not to worry newbies, there are numerous hatha and flow classes that offer yoga in room temperature settings without any added heat.)

The power class went smoothly and I self-consciously joined in with opera enthusiasm to the Ommmms in the beginning and end of the session.  I must admit I was surprised (but not judging) at some of the attire people wore to yoga, or should I say lack of attire.

I have never been one for short shorts after my 4 knee surgeries but in a yoga class it would be the last place I would be wearing them bending over with someone’s nose 6 inches away from my sacred place!  (I guess you would really have to keep up with your Brazilian/Boyzilian waxing on a regular basis!)

Speaking of which you should go see my friend Luba at the waxbar.ca in Kitsilano!   She will keep you Yoga Fresh!

There are body types of all shapes & sizes attending the classes and it is pretty remarkable to see the different flexibility of everyone at every age.  Looking around the room had me wondering if this would be a good environment to meet a potential date. Hmmmm…

The female percentage of participants is definitely higher but it does depend on which class you attend.  (I have noticed that a good number of men attend the power and hot classes.) Some studios are more social than others which is highly needed in the reserved Vancouver dating scene! The last thing people need in this city is a no talking rule, but that is one of the  etiquette expectations in the infrared sauna!

Many studios do have a seated lounge area where everyone can enjoy a cup of tea or relaxing rest before or after a class.  This allows some mingle time to get to know that hot girl or guy you have been admiring for weeks.

The good thing is most people have a yoga routine and take certain classes regularly, so there is a good chance you will see the same people often. This leads to hellos & smiles as you see these familiar faces.

Back to my first yoga class…

I made it through the entire hour without vomiting or passing out due to heat exhaustion & couldn’t believe I was even allowed to have a little nap at the end that the Yogi’s call “Shavasana.” Now we’re talking!

I didn’t hate it that much after all.  (It would have been a little more hospitable if they had supplied a little snack to go with it like they did back in kindergarten but there were some blankets and funny looking pillows on the shelf at the back of the room! Awesome! I wish I had seen them before nap time!)  Note to self for next class. 😉

My yoga loving husband wanted to keep me focused on going back so we purchased a 2 week pass for $35 and could go to as many classes  as we wanted in that time frame.

We did manage to get there 7 days out of 14 but I swear the only thing that got me to the classes at all was the infrared sauna I could enjoy after the hour was over.

I had heard that you can lose 300 calories in about 35 mins in this therapeutic sauna so I thought this was a much better idea than balancing on one leg doing a bird of paradise yoga pose ( you might want to Google that one!) or planking my way through core building exercises!

This sounded like a much more civilized way of losing weight to me!!

Complaining aside, we decided to buy another 3 months and continue on with this new exercise platform.  My husband who is just a tad of an “Outdoors Man” found this serene atmosphere right up his mountain.  The jury was still out in my case but I went along with it to see if 90 days would bring any improvements to the aftermath of my knee surgeries & the body ailments that went with them!

Within a 2 month period I did notice my lower back was not aching as much from my 20 years as a flight attendant constantly lifting heavy bags, pushing heavy carts (yes, I was a trolly dolly)  & reaching 3 seats over to take passengers trays from the window seat.  (I guess that situation was rectified as many airlines aren’t serving meals these days!)

I had much more flexibility in my knee joints and my butt cheeks were lifting up to look like they could shelf a beer once again!  It also made me forget about my other troubles in life for an hour because there is no way you can do these Gumby poses and think about other things!

People actually close their eyes balancing on one leg in a tree pose! Are you kidding me?

OK enough with the whining…what are the benefits and why is yoga so popular?

I now go to Yoga 3 times per week and actually just started including hot yoga once a week but I don’t party the night before and take a big water bottle to get me through the hour (not 90 mins) class.  It is a great detox that’s for sure!

I still include my spin bike routine & weight training as well at a local gym.  The combination of the two is a perfect well rounded fitness regimen for me.

I am happier & have very few mood swings as my mental well being is healthier too.  I have met some great people & there is some dating potential for singles at a few of these establishments.

I wouldn’t say it was the first place you would go to meet a partner but what yoga will do for your body & your mind, will definitely help you to feel great about who you are & improve any deflated self image!

When you feel good, you look good which naturally attracts people towards you.

Three years later I am still there and almost liking yoga now… oh and I go wayyyy more often than my husband!