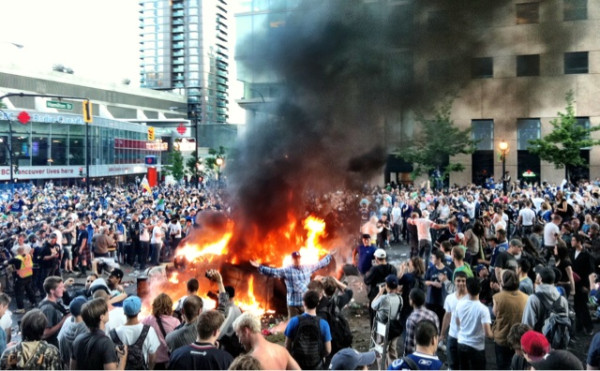 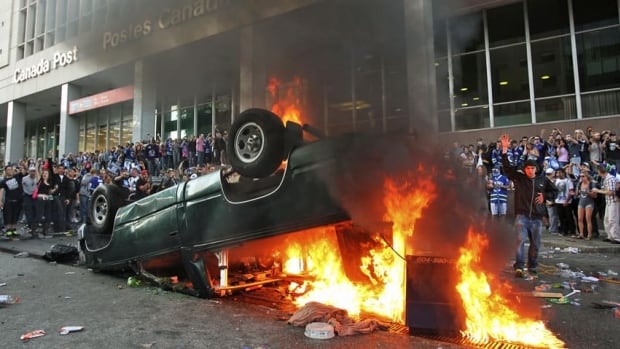 I am writing this with utmost sadness today after a riot broke out in Vancouver last night due to a hockey game.

As a Canucks Fan for over 20 years, I am appalled at how some of the people in the Vancouver area conducted themselves after losing The Stanley Cup Final.

With numerous wars around the world & very thankful to live in a peaceful city, (or so I thought) I would never think that something as trivial as losing “a game” would put Vancouver in such a disastrous state!

We have so much to be thankful for living in one of the most beautiful cities in the world. Obviously the people who started the riot have no respect for how lucky we are!

Maybe we are too lenient on crime here due to the limited punishment for the people who commit these destructive acts. The police are the ones that seem to make the headlines every time they take any action to control a person partaking in these horrific situations.

In Singapore you get “caned” for chewing gum!

I know there are always a few bad police officers that make it difficult for everyone else, but why are the criminals protected more than our own crime force? We need to enforce our police intimidation when we have large events in our city!

To have a group of individuals controlling this riot is wrong & something needs to be done to deter this from ever happening again! The city has to respect our policing enforcement & not have an “Internal Affairs Inquiry” about every little encounter that a criminal bitches about.

We are a joke when it comes to crime sentencing in BC. A slap on the wrist and probation for much of these types of crimes is not going to keep people from repeating these acts.

These criminals that took part in the riot are young adults for the most part. They damaged our city & our reputation! What is wrong with them? Are they looking for their 2 minutes of YouTube fame? Are they proud that, they vandalized innocent people’s businesses? How can there be that many people willing to participate in such a horrendous act?

It blows me away that they are not proud of their Canadian status & how fortunate & blessed we are to live in a war free Country.

There shouldn’t have been cars on the street anywhere downtown, there should have been a huge police presence all night & when the score wasn’t looking good for The Canucks after the second period, the riot squads should have been ready to go a lot faster.

I realize that we don’t see everything that goes behind the scenes and I appreciate our Firefighters, Police, Emergency Medical Personal & all the others who have to deal with this type of hooligan behavior on a regular basis.

My respect for you is huge & I hope one day very soon you are given the reins to protect our city in the way you should be allowed to. It really isn’t about the Hockey game at the end of the day, it is about a group of people wanting to stand out & be noticed, no matter how idiotic they look.

After all… there is no bad publicity, or so we’ve been told over & over again.

Never have I been so embarrassed to say where I live than now! So we lost a GAME!!! The better team won the game. What possesses brain dead individuals to start that crap? It erases all the hard work the team did to get there.

We don’t deserve a team if this is the mentality of this city. There are cities in this world that have rioted to gain their freedom and human rights we riot because of a GAME!! I apologize for my city and the fact that the world had to see that. This morning the amount of foreign news media in the down town core is huge and this is what they take away with them.

Last night after the game the crowd chanted “Go Canucks Go.” I thought that was extremely classy to tell the team we still love them and they tried hard. I said “man that’s nice the city will be fine.” My wife Laurie and I went outside, I washed the car and she worked in the garden. It was great then when I got back in the car to park it for the night the radio came on and I was dumb struck.

The announcer was saying there were fires in the street, people breaking into banks.

If I was a member of that hockey team I would not want to play here anymore, “trade me I want to leave!” Why did people just stand around and stay down there saying all they were doing was watching the mayhem? No one that stayed down there is innocent! Taking pictures of themselves in front of fires!? It’s all disgraceful!! With all the technology & all the video and cameras out there last night I hope all the utter mindless juvenile idiots that started this and continued it be taken to task!!

So to everyone again I apologize for my city we should all hang our heads in shame and maybe come up with a way to emerge from this dark dim view the rest of the country & the world will look at us now. On only the smallest good note, many people have come to the down town core today and offered to volunteer to help clean up. If I was able to be off work today I would be there to assist as well, because I feel really bad about this place right now.

I haven’t gotten far enough out of this city.
Jjs

Living the life of your dreams